"Its Magic!" IWB Rub to Reveal in a Phonics Session 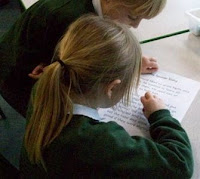 Friday's are great with my timetable including a day with one of our younger Phase 2 classes.  The students all aged between 6 and 8 are Year 2 and 3 and a lively group.  Their day with me includes a focussed reading session, which for the last couple of weeks has involved using activities to investigate spelling and reading texts and words including the phonemes they have been working on during the week.  To help with this I have begun collecting images from the web, that we can use as a starting point for the sessions.

Some of the phoneme groups I still think are a little obscure, and image collections not easy to compile. This week for example we have been looking at the various graphemes that can be used to represent /er/.  The collection included things like ferns, birds, a teacher, a winner who came first in a race, a collection of words, a Whirlwind and  screen capture of a wordsearch.

The images were used as an introduction to the session, and as a way of re-engaging the students in listening for the sounds they had been learning about, or thinking about what each image might represent within the rhyming groups they were working on.  In addition however the images were also selected to support engagement with the main task, which was to work in pairs on a "phoneme Spotter" activity before sorting and grouping the words according to the graphemes they contained.  I was concerned that some of the words might be unfamiliar to some students, and hence the choice of a fern, though the choice of some images as visual metaphors, such as a flame for burn was also interesting allowing discussion of what fire or flame might have to do with the /er/ sound we were working on.

Previously I have printed or copied the phoneme spotters we are going to use to a smart board notebook, to act as a shared read before asking students to find and code words.  For some reason I decided last week to present the spotter covered by a layer of digital ink, and to make it into a "rub amd reveal" activity.  The students loved it, and were completely captured as the IWB eraser was dragged across the text slowly revealing the text a word or sentence/phrase at a time.  "It's magic!"  seemed to be the common consensus, and the looks on the student's faces who had obviously not seen this before was great.  This week when I was passing the class I was asked if I would be making the computer write stories again.  Moments like this are the kind of thing we live for and I was happy to oblige.

What was really interesting today was  though that element of "magic" remained, the students were now anticipating the text appearing and began to read along with the rubber as the text was revealed.  This offered some interesting opportunities to begin playing with the text, 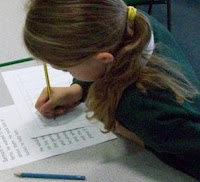 Putting the "magic" aside for the moment, engagement with the text in this way prior to the spotter activity, improved student familiarity with it, while the use of the images to begin meant some of the stranger vocabulary had been introduced.  In pairs I asked them to use their own versions of the text to identify the words that contained the /er/ graphemes or sound pictures, and then pulling the group together we began identifying how the /er/ sound could be written and where each grapheme usually appeared in words.


After this, the students were asked to test our ideas and generalisations by soritng the words they had found in a table.  The group was pulled together again for a final review with a "drag and drop" version of the table top task used to sort the words as a class and check against the work we had done.  While discussing how well our generalisations worked.  E.g did "ir" always go in the middle of words, and "er" always come at the end.  From the examples we had the rules seemed to work pretty well, even though I did introduce at least one example from our photos that didn't match, eg shirt, first, girl and bird followed our rule, but the fir tree didn't, however as a rule of thumb it worked pretty well.

I'm sure for many colleagues the structure of this session is more than familiar, however for me what was interesting was

Posted by Two Whizzy at 9:03 pm No comments:

This week I visited students in a secondary phase ICT extended learning session.  The students were using Pivot Stick Animator, to develop short stories following on from previous sessions where they had planned and developed their own background scenery to help them tell these.  As I was talking to one of the students about their work from nowhere there appeared a beautifully crafted jet fighter that flew across the scene, needless to say I came away from the session with a new online space to share and explore.

Droidz a webspace recommended by this group of students hosts collections of ready made stick figures and effects for use with Pivot, these include creatures, vehicles and weapons, as well as a forum

and share space.  Though they may not all be everyone's cup of tea, and the existence of a forum and share space will have esafety considerations for direct use with students, the characters and figures available do provide interesting extension possibilities and variety for the existing set downloaded as part of this freeware tool.

I would recommend however a visit to the site in order that colleagues can review and check out for themselves figures available, and that primary colleagues might like to create collections using those they feel are appropriate to the activities they they want to develop with students, rather than giving free reign. Hopefully this space will make an interesting visit and add an additional tool set to your bookmarks.  Thanks go to the student group who pointed this out to me this week.  Can't wait to read your outcomes.

Revisiting Viewpoints: Working in the Style of Monet

In a previous post, Viewpoints: Working in the style of Monet I presented a learning story, showing how I and a group of Y4 students had used
The unit, involved the use of a common graphics package (MS Paint) to construct and manipulate student self created images while also consolidating functional ICT skills.  These include

Previous units have resulted in students creating "IKEA" style Prints.  Using MS Publisher to import their final image before adding text and printing out their work on the colour laser.  This time around though I am intending to develop an entirely digital outcome by exploring Monet scenes that reflect seasonal change.  Working with KS2 Students the outcome and brief is to use graphics tools and the collect, store, share and prepare process to produce a short animated sequence based on a single viewpoint or landscape that shows how a scene might appear at different times of the year.

How will this be achieved?

Using Microsoft Paint the students will create a landscape, showing skyline, mid and forground and develop a simple tree skeleton motif using the spray can tool to include trunk and branches.  The tree skeleton will be saved as treespring, treesummer and so on.

Drawing on discussions about how trees appear in images representing the seasons, colour choices made by the artist for mood and effect, the students will  develop their own representations of the tree motif during each season considering  colour choices and exploring the effects they can create by layering spray effects. We will maintain a copy of our original tree skeleton motif as a return point, and for later use in the project.

Using the original tree skeleton, students will be encouraged to create a single landscape starting point, by copying and pasting instances of it to the landscape they have created, composing their own particular viewpoint before saving four copies of this, named landscapespring, landscapesummer and so on.

To each of these landscapes the students will apply the effects  they developed during their exploration of their tree images to show how they think they might appear during each of the seasons.  They might also explore further detailing, eg sky colour effects perhaps through the use of additional painting tools and the undo tool,  while using save as to keep copies.

Using Photostory and the images the students have developed I would like them to create a simple morphing sequence of change for their landscape.  They will be encouraged to select 4 of their images 1 representing each season and to import these to Photostory.  These will then be chronologically ordered on the timeline, before applying transition effects and times.  They will be encouraged also to choose one additional image from those created and to add text to this forming a title overlay.  To complete the project they will add a music track before exporting their completed video for addition to either their class or personal blog space within the VLE for review by colleagues and other students.

If readers have any thoughts about how this project outcome might be further developed I would love to hear from you.  In my new role this year I am also working with a number of Key Stage 3 classes and would be interested to hear from colleagues any ideas they may have about how this type of work might be adapted, extended or used as an element within projects for students in this phase of learning.