Seeking To Inspire: Draft Enrichment Projects for Phase 3 and 4

This week I have been working on a first set of project outlines for ourPhase3/4  ICT Enrichment sessions. They are intended to run for two terms, at an hour per week, to sit outside of the formal ICT curriculum, but to enable students to develop and extend their skill base through creative cross curricular activity. I would value any thoughts or feedback especially though not exclusively from colleagues working with students in Key Stages 3 and 4.  Thanks in advance:0)

Project 1  Digital Storytelling: Comic Strips  and Basic Animation:  In these sessions we will use a range of software tools to help us tell onscreen stories.  Pivot Stick Animator, graphic tools and movie making software will be used to create simple animated stories, and later Microsoft Publisher, online comic strip makers and video stories will be used to help us learn how comic strips work to tell stories.   Working on these projects will help you learn how


Project 2: Podcasting, Vlogging and Interactive Presentations:  This will be your chance to use multimedia to explore, share and celebrate with others some of the things that interest us.  We will use Audacity, Photoshop, Soundation, Moviemaker  and Mediator to create and share our own multimedia content to celebrate and share individual areas of interest or expertise. The content you create will either be presented through a web page style presentation created in Mediator, or depending on how things go perhaps even through use of class Wiki Spaces that will allow a wider world audience to get a glimpse.  Key messages and areas of learning to be addressed throughout our work will be e safety and decision we should make around the information we choose to share with others and how we can share it safely.

Project 3  Designing and Creating simple computer games.  During these session we will be exploring and thinking about computer games and how they work.  We will create a small group company, who will use a tool called GameMaker to design, program and create maze or paddle type games that we can share with friends and play on our computers.  There will also be opportunities to use graphic tools to create our own game characters, backgrounds and objects.  Because these games will be your own creations,  we can’t be sure exactly what they will be like.  One thing is for sure though we are bound to have fun, playing with our ideas, and hopefully each other’s completed games online.  To complete the project we will develop an advertising campaign for our new Best Seller, this may mean drawing on skills from earlier projects.
Posted by Two Whizzy at 8:57 pm No comments:

Last term I began working with colleagues and students in phase three, as a member of the Integrated Curriculum Team.  The young people in phase three are vertically grouped 11-13 years old (y6 to 8) students, and Integrated Curriculum Sessions involve them in engaging with cross curricular themed activities, developed around the focussed teaching of Personal Learning and Thinking Skills.

During term 1 we worked primarily on a project based on The Man of Iron, Isambard Kingdom Brunel and his legacy in the Bristol Area.  The Key focus areas were rooted in developing key skills for Independent Learning and Research as well as facilitating situations to promote Team Work and collaboration.  Throughout the term, students explored a number of aspects of Brunel, his life and his legacy, using material from Primary and Secondary sources.  The following are a pair of video outcomes created using Internet based collect and store processes, and our first attempts at using MovieMaker to prepare and share the outcomes of our work digitally.


In class a number of table top activities were used to prepare and plan the presentations, before using ICTs.

As the video creation process evolved we began to think about how we could create video presentations in a "victorian style."  Silent movies/Newsreel arose as a possible idea, and in MovieMaker the credit tools were used to add captioned splash screens between clips.  To give the clips that "olde worlde" feel an aged film effect was applied to many of the individual clips, and music added as a soundtrack.  The students had a great time, and these are just two from our collection.  Hope they provide a little inspiration :o)


Video Attribution: Thanks to George, Maisie, Oliver and Katie
Posted by Two Whizzy at 10:09 pm No comments:

Bristol.... The Edam Is Stranded: Comic Strips, You Tube, Print Screen and Publisher

This term during ICT enrichment sessions, a colleague and I have begun to develop a sequence of activities working towards the creation of comic strips. 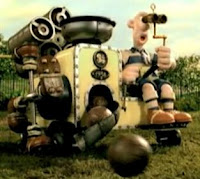 Comic Strips are complex text forms that I have explored a number of times through posts in my blog, but they are also great fun.  In introducing comic strips, how they are constructed and the features of the text type, we wanted to provide space for the students simpy to play and explore. This resulted in our initial session using an online comic strip generator.  Our choice for this was Make Beliefs Comix a site providing 3 frame strips, drag and drop characters and tools, and point and click editing. This allowed the students space to simply play and create in the style and genre while becoming familiar with some of the features we might expect to see supporting text development in a comic strip eg captions, speech and thought bubbles etc.  A key skill we also expect is the student's capability to take screen shots of their work, to support our APP process, so completed strips were copied,  using the prtscr before being pasted to a local application (MS Publisher) for cropping and resizing, the latter part of this process being a useful one for the students to use later as they create their own comic strips.

As teachers in our school have access to You Tube, I decided to develop the sessions around creating new stories and narratives from familiar starting points.  To introduce the sessions we began watching a couple of movie shorts from the Aardman YouTube Channel, and the Cracking Contraptions series.  I chose the Snoozatron and Shopper 13, for my sessions partly because I love the sixties seventies space race puns in the latter, but also because Gromit's facial expressions throughout the snoozatron, just beg for and invite the use of visual cues to infer possible content for thought bubbles. 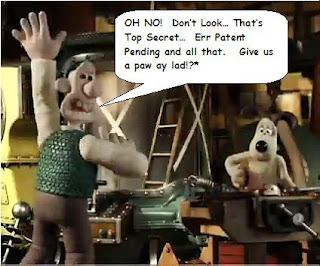 You Tube uses flash movies, which gives another advantage, in that they can be used. unlike many other online video formats, for direct screen capture from the web browser.  Prior to the session I previewed each movie and at significant or interesting points in the story, used the print screen key to capture these scenes.   Paused the movie, centreing the movie viewer in the window, I pressed the print screen key to capture scenes.  Using Microsoft Paint, the resulting images were then pasted individually into software, cropped and then saved to a folder as JPEG images.  In school the images collected from each movie were copied into the shared storage space for access during sessions by students.

Having watched the movies, I shared a prepared model for a publisher based comic strip with the students, (an available design) and modelled how to 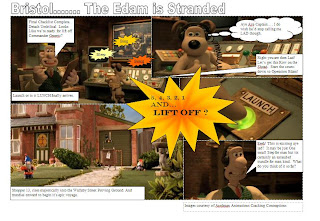 Before encouraging the students to begin creating their own visual version of the story of their choice, the first steps in developing their creative recount.

Publisher being an object based package, is a really intersting way to allow students the facilty to draft and redraft visual story structures on the go.  Once images have been added the students can then begin manipulating their story, dragging and reorgnising images to develop and resequence their visual narrative.

During this process a number of fundamental DTP and graphic handling concepts become increasingly important to developing a quality outcome from the draft, and identified themselves as incidental teaching points.
With the images in place our next steps over the coming weeks will be
Image Attribution:  Images are either Screen captures from YouTube video versions of the Aardman Shorts
The Soccamatic
The Snoozatron

Shopper 13
or composite images created using MS Publisher by the author from images captured from these.
Wallace and Gromit are Nick Park Creations
Posted by Two Whizzy at 6:48 pm 2 comments: