Memories are Made of This: Narrative Recounts and Photostory 3 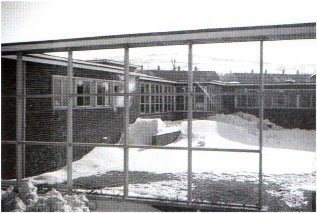 I haven't been able to get to my Blog recently. The end of term is approaching all too quickly, but this alone hasn't accounted for my not being able to make space and time to write. December 16th is not only our end of term, but represents the end of an era for our current school building. When we reconvene in mid January, the buildings that were once Teyfant Community School, will begin to disappear, hopefully not too violently, beneath the landscape that will form the new BSF through campus site, known as the Bridge Learning Campus.

I have spent many happy years working here, interspersed with the odd secondment. Some of these were intended to lead to other things, but the place and its people have always drawn me back. This move comes during a year that not only means a new beginning, but also at a time when "the old school" has reached a significant landmark in its own service to the community, its 50th aniversary. To celebrate the life of the school we and our students have ended our time here with a themed fortnight looking back over those years.

As a stimulus to begin work with my class I made a video timeline using Photostory, Moviemaker and CDex. To begin our look back over the past 50 years I spoke with colleagues about their significant moments and used these materials from connected Earth, to frame web searches for images use. The web based collect and store process, began with a google image search. These images were saved to the network, in a share folder, alongside images scanned from dated photographs we had of the local area, and school itself during the period.

Once the collection had been made, these images were imported to Photostory, and using the timeline feature here, each image was dragged into time order. Using the text tool, dates were added as ovelays to each image, before saving the project and exporting it as a video file (.wmv).

Using CDex, I "extracted" mp3 tracks from my CD collection to represent each era in the life of the school, then using Moviemaker began the prepare stage of the process,
Using the crop tool, each audio track was then adjusted, by dragging it to fit within the video clip it represented. The video was then previewed and "played about with" until I was happy with the audio and video.

Using the audio tools in Moviemaker I then clicked on each audio clip inturn adding a fade in and fade out to each clip, before finally exporting the completed video.

E Safety Point: I used music from my CD collection so I cannot publish the timeline here, but perhaps the process outlined above will be useful in helping others to make a similar tool for themselves. If interested I would be prepared to remove references to our school and upload the video minus soundtrack for others to use as a starting point.

In class we invited past students, some of whom were the children's parents and grandparents to visit and to talk about their experiences of Teyfant. As you will see in the video clip presented below the students gained a great deal from this process, interviewing and listening to voices from the past, not only provided insight to what the school was like, but also provided modelled voices in past tense to frame the script writing process for the video I wanted them to engage with.

We combined elements from the QCA art unit viewpoints, with a short literacy unit developed from the student's previous recount work to create their scripts.

Beginning from the students we discussed our favourite memories and places associated with these from around the school site and used view finders to frame shots, before using digi blues to capture the planned images. These images were then transferred to a share folder on the school network.

The students were then encouraged to compile a 3 image video montage, using Photostory, to use as a frame for their script.

Alongside this we used the relationship between colour and feelings to explore some of the images we had captured, sketching these, and using photocopies to apply different media types and colours to help us explore the vocabulary of feeling.

Using our vocabulary and representations we began thinking about our memories and feelings not only about our time at school, but about our views of the future, and the context for the student's script was set. We wanted the children to imagine that they were visiting the school site some time in the future, the old school had gone and they were looking back on their time here in the same way our visitors had when they came into school. The children were encouraged to write a short voice over, that would need to be written in three parts or paragraphs, that they would record to support the images they had placed in their photostories.

Once complete and reviewed/rehearsed in pairs, the students have begun adding these. Here are two example outcomes, with more to come as we complete the process.

It has been interesting to see how the students engage with the task. As well as the presenter role, they have also begun to assume directoral and editorial roles, one child recording and supporting the other to improve their presentation, talking about, deleting and redrafting the spoken writing outcomes, in response to what they hear. These video's may represent the student's thoughts on the end of an era, and their views of the future, but I find myself increasingly interested in and looking towards what they might afford as we move on. Now the students are familiar with the tools, it might be interesting to see what they make of them as vlogging tools, and ways to record and share community learning experiences.

As a teacher I frequently encounter videos on YouTube that I think would be great to use with students, but because of firewalls am unable to use directly from the web.

There are a number of ways that videos can be downloaded from YouTube to enable their use directly from your computer. I tend to use Zamzar, following the process described toward the end this post. I like Zamzar because

Today in my feeds this post by Tony Karrer, points to another option, a "bookmarklet" that can added to the links bar of Firefox, or added to favourites in IE, and then used to download YouTube Videos directly as mP4s, when visiting the host page. A nice tool and shortcut for anyone with Quick Time installed.
Posted by Two Whizzy at 7:29 pm 3 comments: