Where's Gromit (Geotagging a trail and playing with Google Maps)? 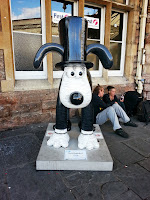 As part of the Wallace and Gromit Grand Appeal for Bristol Children's Hospital, Gromit has been Unleashed upon the City and surrounding area in various guises.  Our mission should we choose to accept.... to track him down and.... well.... admire him.....

On the trail we have met scores of people young and old, using without thought a host of mobile technologies and tools, iPads, Tablets, digital cameras.  Personally I have been using a Smart phone, snapping a couple of images and then adding these to a simple photo blog as well as sharing these with Facebook Friends and Twitter Followers . 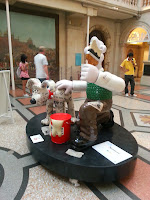 A while back I began using Quikmaps to geotag images to their locations, Not all of the characters on this trail are as easy to find as they appear on the official trail map,  so in addition to the official map and app here is a link to my "Google Map," where I have begun to add place holders showing the location of and one image for each Gromit Sculpture I have found.  This has promoted a great deal of discussion at home as Google's satellite imagery has not been updated for the area for quite some time, new buildings have gone up and in some parts of the city the landscape has changed beyond recognition.  It has been a challenge identifying some locations but I have really enjoyed the process as well as reminding myself of some of the fun that can be had revisiting and reusing a familiar tool.
Posted by Two Whizzy at 10:57 am

Love it! One of Bristol's greatest creations I think! And the geomap idea is great, so no Gromit is missed out!

Thank you, unfortunately I didn't make it to Paddington Station, so there is one missing.